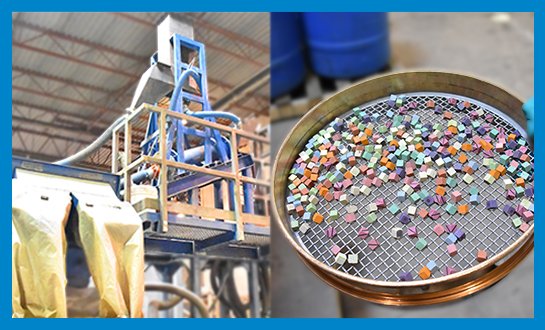 If you are looking to reduce operating costs for mineral beneficiation, dense media separation (DMS) plants are an excellent option. Our mineral processing laboratory provides a pilot-scale DMS plant testing program to create customized solutions catered to your project objectives. Get a glimpse behind the curtain of our mineral laboratory as we walk you through our pilot-scale DMS testing process below.

Before any pilot-scale testing takes place, our team performs bench-scale heavy liquid separation testing to determine if the client’s sample is amenable to the DMS process as well as the optimal specific gravity (SG) cut points for a given sample. Once this has been successfully determined, both water and the heavy media (ferrosilicon) are added to the DMS plant. A Marcy cup is then used on the slurry to determine the SG of the mixture.

A set of 8 mm coloured tracer cubes are fed to the DMS plant in order to measure the SG cut points as the plant is running. Also known as the D50, the “cut point” refers to the specific gravity at which particles have a 50% chance of moving to the sinks or the floats of the plant. Each colour of cube has a different SG, and as the tracers pass through the DMS system, the heavier tracer cubes will move to the sinks while the lighter ones will move to the floats. The tracers are then removed from the sieves at the plant output, washed, and counted by colour to determine the effective SG cut point of the plant.

Depending on the results of the tracer test, our team will make adjustments to the dense medium until the desired SG cut point is reached by adjusting the slurry (through adding water or ferrosilicon media) and rerunning tracer tests. Once the desired gravity cut point (as determined by previous bench-scale heavy liquid testing) is reached, our team will manually add your sample to the DMS plant and run it through the system. After, the sample is then separated into sink and float products on opposite sides of the screen deck. The sink and float products are screened and rinsed to remove any remaining dense media. During this process, our team will be performing visual spot checks to ensure the proper separation of the DMS product.

For pilot-scale dense media separation plant testing, we require a minimum sample weight of above 50 kg. Sample weights can vary significantly between tests, and our pilot-scale tests can handle samples that weigh well over a tonne! Choosing the right sample weight really depends on your project objectives as well as other considerations such as downstream processes. If you are interested in our pilot-scale DMS plant tests, be sure to reach out to our mineral laboratory. We would be happy to walk you through selecting sample sizes, altering tests to meet your project objectives and more.

Looking for metallurgical testing experts equipped for your needs?

Speak to an expert

Stay In the Loop

Our worldwide reach provides the support you need, where you need it.