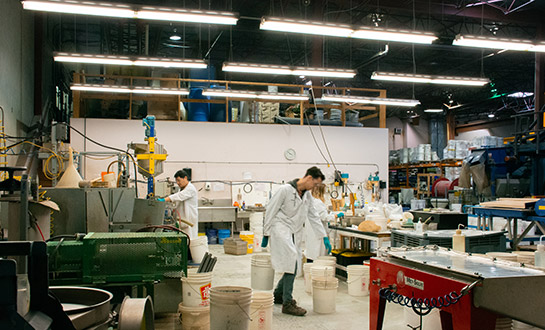 Nevada Zinc Corp. has released positive initial results from mineral testing and sample-processing studies completed on representative non-sulphide-mineralized material from its Lone Mountain zinc project near Eureka, Nev. Importantly, initial mineral testwork showed that by using a 3.03 specific gravity (SG) cut point in heavy-liquid-separation (HLS) analysis, 79 per cent of the zinc reported to a high-grade zinc concentrate that would be a potentially saleable concentrate grading 36.7 per cent zinc. At an SG of 2.85, 92 per cent of the zinc reported to the concentrate. The mineralization and non-mineralized gangue was found to have rather simple mineralogy, and the HLS studies indicate that 90 per cent of the potentially acid-consuming carbonate gangue can be rejected using only HLS.

The rejection of the potentially acid-consuming carbonate minerals using only HLS is important given that a reduction in non-zinc carbonate content would significantly reduce overall acid consumption if acid leaching were to be used in any eventual mill flowsheet. The company continues to explore alternatives that have potential to drive value creation through standard, as well as innovative, mineral-processing solutions.

“Knowing that the high-grade near-surface mineralization we discovered on our Lone Mountain project was not typical sulphide mineralization, we were keenly aware of the need to evaluate the mineralogy of the mineralization and also determine processing options earlier in the exploration phase than typically required. We decided to initially investigate the possibility of upgrading the mineralization with just dense-media-separation (DMS) techniques using heavy-liquid-separation testing as a proxy. We were pleasantly surprised to find that firstly, the mineralogy is rather simple, and secondly, that a simple process of crushing, grinding and dense media separation can be expected to produce a concentrate of sufficient grade and quality to be a shippable and saleable product without any further beneficiation. Dense-media-separation plants are becoming much more common and less costly and, in our case, may prove to be a simple way to very significantly reduce both capital and operating costs in any eventual process plant at Lone Mountain.”

Mineralized samples were submitted to Process Mineralogical Consulting of Maple Ridge, B.C. Various tests were performed, including optical mineralogy, ICP-OES (inductively coupled plasma optical emission spectrometry) analysis and powder X-ray diffraction to determine mineralogical compositions. Polished blocks were created for presentation to the Tescan integrated mineral analyzer (Tima) to determine the mineral content, as well as to determine the liberation and association constraints of the zinc-bearing minerals which may affect the processing of the material for producing a zinc concentrate.

Heavy liquid separation testing was carried out in conjunction with the mineralogical studies with a view to determining the grade-recovery relationship for a composite sample of mineralization from the Lone Mountain property in Nevada.

Zinc deportment by particle size was determined prior to the HLS testing. Subsequent to particle-size analysis, a 16-kilogram sample was washed and screened, and three prepared-size fractions were tested at four specific gravity cut points. The resulting products were assayed by sodium peroxide fusion at Sepro Labs Analytical, and a duplicate assay was done on at least one sample from each size fraction for quality control. Only assaying was carried out on the fines material (less-than-0.85-millimetre screened material).

A robust quality assurance/quality control protocol was not established or completed on the various sample fractions. Sepro Labs and Nevada Zinc have determined that the process as outlined and completed is sufficient for the stage of the work being completed. A process of back calculating the grade of the sample was also carried out to ensure the reliability of the results generally.

The primary conclusions of the HLS testing are summarized by Sepro Labs as: “In general, the sample responded favourably to heavy liquid separations. Conventional trade-offs between concentrate grade and zinc recovery can be observed in the results. At an SG cut point of 2.85, 92 per cent of the zinc was recovered into 53 per cent of the mass at a grade of 25.1 per cent Zn.

This indicates that a potentially saleable concentrate can be produced by a DMS-(dense media separation)-only process. Regarding the ability of HLS to lower the overall Mg-Ca carbonate content of the resultant concentrate, Sepro Labs concluded: At an SG cut point of 3.03, 90 per cent of the calcium and magnesium was rejected while 79 per cent of the zinc was recovered into 31 per cent of the mass at a grade of 36.7 per cent.

In the recommendations portion of the Sepro Labs report, it reports as follows: “The heavy-liquid-separation test results are encouraging. The results show that production of a high-grade zinc product and rejection of the majority of the calcium and magnesium is attainable. From experience, Sepro Labs has found agreement between HLS and DMS results to be very good.” Sepro Labs recommends that further testing using a pilot-scale Condor DMS plant be considered.

About the Lone Mountain Project

The Lone Mountain project, composed of 218 claims covering approximately 4,000 acres and 100 per cent owned by the company through its wholly owned U.S. subsidiary, is subject to certain terms as per the underlying lease agreements disclosed on SEDAR (press release dated June 24, 2014, and various other filings including the company’s management’s discussions and analyses filed on SEDAR).

The property is located in east-central Nevada and is easily accessible by paved and gravel roads northwesterly from Eureka, where all essential services are available. The property includes the Mountain View mine that is reported to have produced about five million pounds of zinc and about 600,000 pounds of lead from small-scale very-high-grade non-sulphide mineralization. Mineralization is located within brecciated Devils Gate limestone and is thought to be structurally controlled, perhaps at the intersection of two fault systems.

Mr. Durham, PGeo, is a qualified person as that term is defined by National Instrument 43-101 on behalf of the company and has approved the scientific and technical content contained in this press release.

Ish Grewal, PEng, is a qualified person as that term is defined by National Instrument 43-101 on behalf of Sepro Labs and has approved the scientific and technical content contained in this press release ascribed to Sepro Labs.

The company has granted stock options to purchase 750,000 shares to directors, officers and consultants under the company’s stock option plan at a price of 39 cents per share with an expiry date of April 6, 2021.

Sepro Labs is a full-service mineral processing laboratory located in Langley, B.C., Canada. We provide mineral testing and a variety of lab services, including hydrometallurgy, scoping studies, flowsheet development and optimization, as well as custom solutions for unique projects. At Sepro Labs, we work closely with our clients at all stages of development to tailor our test programs to their required level of detail and budget. To get started, contact our mineral testing experts at Sepro Labs today.

Looking for metallurgical testing experts equipped for your needs?

Speak to an expert

Stay In the Loop

Our worldwide reach provides the support you need, where you need it.